As both of you who read this already know, I am going to be a father.  And last week we learned that she is a girl, which came as not surprise to me.  I have known that it was going to be a girl since before conception, since we started trying.  In my world of doubt and uncertainty and non-absolutes, this was something I KNEW.  I cant really explain it, be even more certain than any belief in a god, I believed I was to father a little girl.
With this knowledge, I have been searching for my daughters name for years.  The steady stream of media input I take in, TV, movies, books and audio, all have provided potential names. NPR corrispondants names are a wealth of potentials, especially the names like Lourdes Garcia-Navarro or Ofeibea Quist-Arcton. But when I was listing to Assimov's Foundation Trilogy, I found the name, Jezebel.  OMG, you are thinking, how can he do that!!  Or, good name, but...  If it weren't for Betty Davis making her into a hussy in the 1930's, I think it would fly.  Here is a strong-willed, independent woman who knows how to get what she wants.  Yeah, my kind of girl!
My wife, of course, is totally against this name.  "She will be beat up in school, or worse!" she claims.  I hate to think we still live in times where bullying is allowed, kids are made fun of for their shape, size, color or names.  I know growing up the closest I ever came to getting in a fight in all the years of school was one day on the bus defending my sister who was the focus of some white-trash red-necks peppering her with racial slurs, and i suppose not much has changed, at least for the better, in the 30 years since then.  And maybe she will get some unwanted evilness flung her way, but will gain strength though it.  Like Johnny Cash's A Boy Named Sue.
So I will lose this battle, She will be named Rowan or something out-of-the-top-1000-names list, but will always be Jezebel to me.  She will grow up to change the world, making it a better place.  Her influence will be as legendary as the name... at least in my world.
Posted by twedelc at 1:17 PM 1 comment:

so what to blog about?
How the Brew guild annoys me?
How work in "the dungeon" sucks?
How I cant make a massage chair work?
How car shopping with wife who has completely different ideas is impossible?
How Brewing Beer should be fun?
How My body is falling apart?
How impending fatherhood effects me?
NoBloPoMo?... nobody tell me anything! 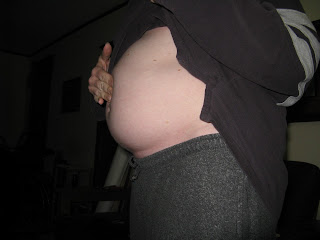 isn't that just so cute!
who cares about the rest of it!
Posted by twedelc at 10:53 PM 3 comments:

I like Halloween, among the top 10 days of the year.  ( like a lot of things…)  It’s that day to dress up or dress down or just be a little goofy… and not be out of line with everyone else.  It is the day that I can wear my kilt to work, and not worry about getting sent home.  Sure I get the “what do you have on under your kilt” question, and being in the harassment free work place (No Fun Zone), I reply with a “yes” or simply smile.  Other work friendly costume I have worn, a toga as I was Socrates, a custom home-made Cowardly Lion, and this year a frontier bartender, of course I was tending bar, so not much of a stretch.
I also like the benefits of Halloween, candy, especially the small size.  It is the only time spending more money for cute little candy bars is not frivolous.  Since I have decision making problems, I can have two and satisfy myself doubly!  And Smartee’s and Skittles’ and Tootsie Rolls and…
Past my trick-r-treating days, I can also get a great measure of joy handing out candy.  In years past there has been a party surrounding this, the first one when I lived in Prairie Park, across the street from a grade school.  As with many of my parties, adult beverages where served and we took turns handing out the candy everyone brought over.  When we ran out of candy, we broke into the freezer and started to hand out frozen burritos, until reason prevailed and we turned off the porch light.  There were quite a few kids, but nothing compared to our current location.  Old West Lawrence, maybe due to it’s proximity to downtown and that candy handout, or maybe the reputation of the neighborhood, we get A LOT of kids!!  For several years we had parties, we needed extra people bringing goodies to supply candy to all the goblins and princesses, and then last year I took a tally, 170 something, if I remember right.  Broken down by time, there was a quick start about 6:30, then a lull followed by a rising tide that crested around 7:30, and slowly receded until 8, when all that was left roaming the streets where bands of teen agers.
This year, we were prepared.  With the house in various stages of (dis)repair, we didn’t have a party, so my wife bought 10 bags of candy, including 2 super sized bags.  Wading home from Angler’s though the sea of people sucking up the candy handouts down town, I knew we had it coming.  The doorbell rang with the first pair of kids just before 6:30.  I grabbed the caldron of candy and my beer and headed for the porch.  4 super heros  into it, we got a note pad and pen to keep track, and soon after that I went in and filled a pitcher of homebrewed IPA for the parents.  It was fast and furious and when we ran out of candy bars at 7:30, our tally was in the 170’s again, and we were down to the tootsie family multi pack.  I wanted to make it last, so 2-3 treats got handed out instead of handfuls, and it worked, at 7:58, we hit the magic 200 trick-r-treater mark.  And as I ran glass the last of the 3 pitchers of beer I poured next door, 2 more came up, final tally 202!!  Whew!
Now a short little complaint.  I don’t think kids know what Halloween is, or even what they are supposed to do.  Half the kids mumbled “Trick or Treat”, and only one offered to show us his trick.  And while some parents stayed on the sidewalk, many walked all the way up to the porch escorting the little zombies.  I suppose it was crowded and busy enough there was not time for tricks, but at least say the line.  My first Halloween memory, I was a football player, and for my trick I would pose with the football like I was OJ running past a defender, the posture that I later recognized as that of the Heisman trophy.  I was cute.  And my little sister was a cheerleader, even cuter (but cant find that picture…) 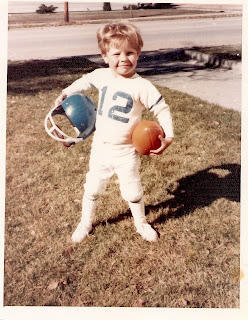 Here is one with the two of us.  I don’t think this is Halloween, but it could have been, or maybe someone’s wedding, Upton is pretty rural. 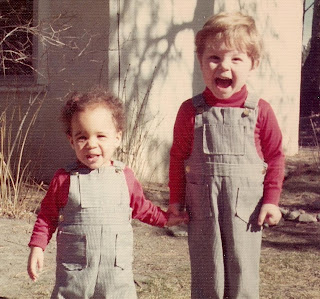